The Celtics might need a lock out to win banner 18?Lockout talk Part 2 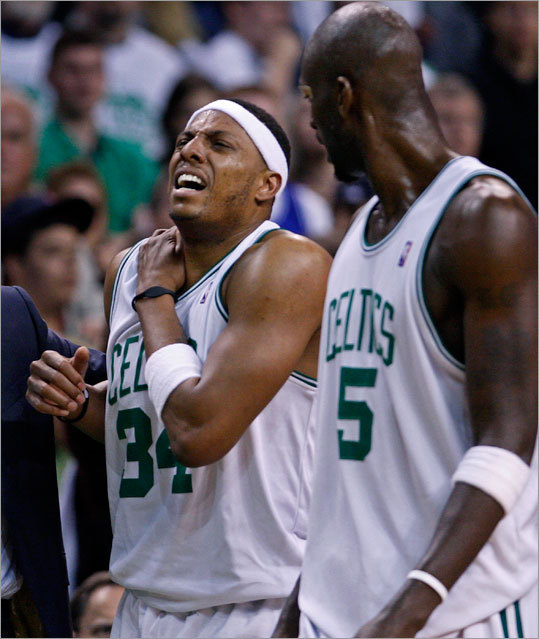 It feels like a guilty pleasure,but it's more of a thought. Would a lockout really help the Celtics win another banner. This old crew would need help,and in anyway they could get it. The Celtics might have gotten bounced for many reasons. Poor execution down the stretch,and some injuries,and maybe one of the biggest reasons,was the energy the Celtics ended games with, in the Miami series. Maybe the long playoff run from 2010 caught up with this team. I want to think it's like the Spurs from the 2000's. It always played out were the Spurs would win a title one year,and the next season burn out in the playoffs. Their championship pattern? They won in 2003.2005,and in 2007.

I don't think this will be the case for the Celtics. Their older then those Spurs teams,but with the short playoff run this season,and if their is a lockout next season,and the season is cut to 50 regular season games. The Celtics may have the energy for one last title run.

I love the NBA,and even though this might be the biggest help for the Celtics,in terms of rest,and help for their old legs. I don't want a lockout to hurt the League.This is all playful fun thinking it will help the Celtics. The reality? The Celtics need to get better,and it starts with their bench. Do they re-sign BABY? I don't think so,and that's perfectly fine by me. He's no longer the right fit for this team.He became a player that didn't get better. The Celtics also need to decide if they want Jeff Green. The Celtics also need to decide if they want to move one of the core 4,or if they try to move either Ray or Paul to the bench. I prefer Ray coming off the bench. I think Ray takes care of his body,and he could be like a Jason Terry  type, off the bench,but much better.

Another factor from the lockout? The hard cap scares me,and it sounds bad for the top teams right now. A good chunk of the title contending teams have hefty contracts. It could be big for the Celtics. If certain teams can't sign key free agents,or if they need to trade large contracts,the Celtics might have enough talent to win. Their is one certain thing next season. The league will change. I'm thankful we have a good ownership group,and they seem willing to pay for titles.The luxury tax is also something that will go,and maybe the Mid level exception,which is huge for teams like the Celtics,who have other big contracts tied up,and the mid level let's the Celtics add a good player who will take a pay cut for a chance at a title.

The real issues for the Celtics? Will they be considered title contenders next season? It depends on Danny's ability to add youth,and at the same time not messing with the teams core. I would  also hate to wait ,and see a Celtics game until January. That was the case in 1999,and I don't want to see that. The league has been gaining so much popularity right now,and I like to say the Celtics helped that out,and I guess the Lakers helped to. The rival of the two teams,I think helped the league gain some viewers. Also all the young talent right now.

This is all talk that works when the season is over,you become so ready for another game,and the sad thing is,you have to wait months.