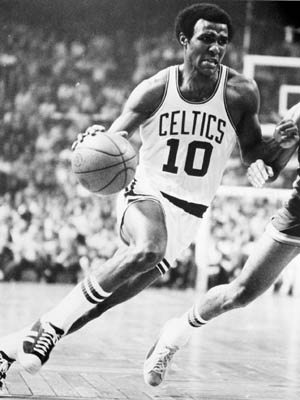 When I think of Jo Jo White I see him by Ray's mom when the Celtics won the title in 08. Of course I recall the old NBA films,and watching Jo Jo win two titles with the Celtics in 74,and in 76. He won  finals MVP in one of the best NBA finals in league history.

White was born in St. Louis, Missouri, He played college basketball at the University of Kansas,

White was drafted in 1969 in the first round (9th pick overall) by the NBA's Boston Celtics, who at that time had just won their 11th championship in 13 years. However, before White even reported to training camp, the Celtics' center and player-coach Bill Russell announced his retirement. White would endure a rebuilding season while the Celtics got back on track, drafting Dave Cowens and trading for Paul Silas. Along with these two and veteran John Havlicek, White would be the cornerstone of two Celtic championship teams in the 1970s (1973–74 and 1975–76).

White went on to become one of professional basketball's first "iron men", playing in all 82 games for five consecutive seasons during the 1970s. White's skills included great defense, speed, an underrated jump shot, and team leadership.

The 1970 Celtics finished with the franchise's first losing record since 1951. With White leading the attack from the point guard position, the team returned to its winning ways in 1971. He was an All-Star for seven straight years from 1971 through 1977, finishing in the top ten in the league in assists from 1973-77. In 1974 and 1976, White helped lead the Celtics to the NBA championship and was named the most valuable player of the 1976 NBA Finals.

Perhaps the most exciting game White ever played was the triple overtime win against the Phoenix Suns in game 5 of those finals. White was the game's high scorer with 33 points, had a game high 9 assists, leading the Celtics to a 128-126 win.