KG watching a game in Minnesota,and let's talk about his old day's 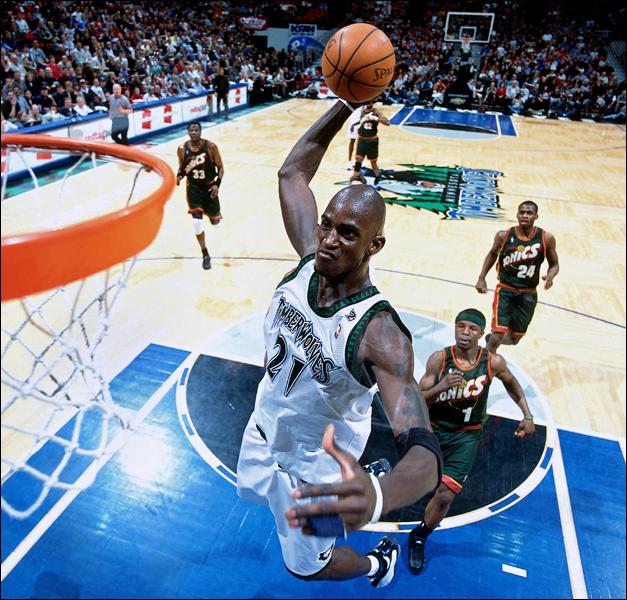 It might be the offseason, but Kevin Garnett still has his eyes on basketball. Friday night he was spotted at a WNBA game in Minneapolis between the Minnesota Lynx and Atlanta Dream flanked by former Minnesota governor Jesse Ventura and former Timberwolves guard Troy Hudson.

The face of the T'wolves,and a stand up guy,and a player on a small market team. He didn't give up on Sota,but in the end for both parties it was best to part ways. He carried some bad teams to playoff bids.

Garnett made an immediate impact with the Minnesota Timberwolves leading them to eight-consecutive playoff appearances.

In the 2003–04 season, things finally seemed to come together for Garnett. In past years, the Wolves had practically been a one-man show, but now, the Timberwolves had made two valuable acquisitions: highly talented but volatile swingman Latrell Sprewell and the seasoned two-time NBA champion Sam Cassell.  Powered by the best supporting cast in his career, Garnett averaged 24.2 points, 13.9 rebounds, 5.0 assists, 2.2 blocks and 1.5 steals per game for the season. Having recorded career highs in points, rebounds, blocks and leading the league rebounds, Garnett was named the league Most Valuable Player for the first time in his career

KG put his stamp on his legacy in 2008 when he won the title with our Celtics. KG in Minnesota will always be something to remember if your a simple KG fan. I think if KG had the same talent that Tim Duncan was supported with. KG would be a multiple champion.